Book Review – The Buddha Pill: can meditation change you?

THIS book is hard to read. Literally. The small, faint, sans-serif typeface made the task extremely tiring for my eyes and mind. The publishers should be ashamed of themselves for letting it go to press like this. It’s a poor do because what the book has to say is interesting. I only persevered with it because I had heard on the radio that it contained research information about the harm Buddhist-inspired mindfulness and meditation practices can do, contrary to the overriding current view that these are harmless and beneficial and that, used therapeutically, they help people; that interested me. I had myself come across examples of people whose ability to think and empathise had been shot to pieces by practising meditation.

Millions of people around the world are said to meditate daily. Mindfulness courses are on offer in schools, universities, the workplace, and in NHS hospitals. It is mainly used for one of its useful side-effects: relaxation. As the authors point out, the expectation of feeling calmer may contribute to a placebo effect. Some refer to it as ‘mental hygiene’. And many admit to becoming addicted to this form of hypnotically selfinduced bliss, as one of the authors of this book does before describing the downside of the addiction: how he was shocked to realise that, on coming out of meditation and feeling detached from negative feelings, he could be less sensitive and empathetic to other people’s feelings. His addiction to mindfulness had become a way of bypassing real life.

I found that the descriptions in the book of the claims made by some transcendental meditators, particularly the one that declared it was possible for meditators to levitate, hilarious. Rather than levitating in cosmic bliss, researchers had shown over and over again that meditation had no advantages over relaxation and hypnosis. Moreover, when monitored, it was discovered that the most experienced practitioners tended to spend a lot of time asleep when meditating.

The authors began their work as experienced meditators themselves, not expecting to stumble into a mass of research that showed that, although there is evidence that mindfulness has “…a moderate effect in reducing the effects of conditions such as anxiety and depression or pain … there was no evidence that mindfulness works better than relaxation, exercise or cognitive therapy”. And they point out that, if the technique really makes a difference in the ways its promoters claim, surely mindfulness ought to have a deeper effect than simple relaxation or exercise. Despite initially being believers in the power for good of practising mindfulness meditation, Farias and Wikholm conclude, “There is no robust scientific evidence that mindfulness has any substantial [beneficial] effect on our minds and behaviours.”

In the chapter called ‘The dark side of meditation’ they ask the difficult questions that are seldom given voice to in this age of ours geared to wishing for simple, quickfix solutions to personal problems: do people have unrealistic positive expectations for what meditation can achieve and can meditation have adverse effects? The answer to both those questions was found to be yes. For example, people like to think of mindfulness as a way of dealing with stress overload. Lowering stress levels is the expectation. But, by measuring the cortisol levels of people before and after they did their mindfulness exercise, researchers discovered that mindfulness raises stress levels. Clearly not the result anyone was expecting and they don’t offer an explanation. However I wonder if, because mindfulness is hard to do well, people might start to think they aren’t doing it right and are useless, which would raise stress levels.

We know that some people will feel mindfulness training is of considerable help to them, but can’t ignore the possible negatives for others. One study of people on meditation retreats found that 63 per cent of the meditators experienced at least one negative effect and 7 per cent experienced profoundly adverse effects. The negative effects included anxiety, panic, depression, increased negativity, pain, feeling spaced out, confusion and disorientation. What’s more, “Not only did those with more experience of meditation find themselves with negative symptoms – particularly anxiety, confusion and restlessness – they also had considerably more adverse effects than the beginners.” Thus the authors fairly present, I think, a range of evidence for how risky it is to teach people mindfulness techniques, giving actual case histories of how indulging in mindfulness has induced anxiety attacks, nightmares, depression, depersonalisation and psychosis.

Most teachers of it, say the authors, will tell beginners that a short course of mindfulness training is the perfect introduction to Buddhism, so it is often offered as a ‘spiritual’ technique for bringing about deep personal change in a way that might usually be seen as ‘the blind leading the blind’. There is also information in The Buddha Pill on the little-known violent history of Buddhism: violence that continues right up to the present day with Buddhist monks massacring innocent people who hold to a different faith, despite the nonviolent nature of Buddhist teachings. The idea that Buddhism did not force people to convert is a myth.

And then there are quotes that display how out of touch with reality some modern ‘gurus’ and religious leaders are: “If every eight year old in the world is taught meditation,” said the Dalai Lama, “the world would be without violence in one generation.” Tosh!

There is, fortunately, an ancient and genuine stream of knowledge in humankind, a cast of mind that understands the requirements for developing human potential and occasionally the authors dip their toes in it. For example, the authors quote an eighth-century spiritual teacher who describes what happens to those who believe the purpose of meditation is to experience the now and stop thinking; they end up in a special realm – the hell of mindless beings.

IVAN TYRRELL is an experienced psychotherapist. He a director of Human Givens College, was a founding member of the European Therapy Studies Institute (ETSI) and co-developer of the human givens approach. He is a Fellow of the Human Givens Institute. 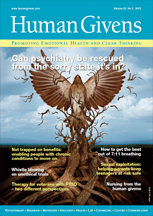 Spread the word –  each issue of the Journal is jam-packed with thought-provoking articles, interviews, case histories, news, research findings, book reviews and more. The journal takes no advertising at all, in order to maintain its editorial independence.