Book Review – MindReal – how the mind creates its own reality

“Our ‘reality’, the one we live inside is virtual.  We call it MindReal.”

In the beginning was the micro-organism and life was simple. But when micro-organisms combined with each other to form multi-celled life-forms, things became more complicated: to survive they needed to obtain and process more and more information from the surrounding world.  As these organisations of cells got bigger and more complex, they developed an insatiable hunger for information, just like modern-day companies and organisations. And to ensure that they got the right kind of information, they evolved specialised receiving apparatus and the “wetware” needed to select the information that would enable them to survive and flourish.

…and Mind LTD was formed. Mind LTD is like one big company.  Like any big company, the workers work in far-from-harmonious conditions.  There are crazy and outdated policies, plenty of vying for space, lies and deceit, massive ignorance, and plenty of screwing up.

Surely the human mind, with its capacity for rational thought and intellectual sophistication, has outgrown Mind LTD?  Not so, according to Robert Ornstein the author of MindReal. He describes the human mind as a ramshackle affair made up of “…different circuits, of different priorities, of the evolutionary developments of different eras, and, in fact of different animals”.  It seems that the evolving human mind, rather than forging new elements, simply adapted and made increasingly sophisticated use of previously existing ones. Hence its great flexibility when it comes to manipulating the environment – over the millennia humans became better at adapting to local conditions than any other species.

But this adaptability has enabled humans to create a civilisation which totally overwhelms their minds, the present global financial crisis being a case in point.  Certainly, its genesis involved crazy policies, ignorance and plenty of screwing up! In fact, Ornstein points out that “The same mental routines which originally developed to judge brightness, taste, weight and suitability for eating now judge prices, politics and personalities.” 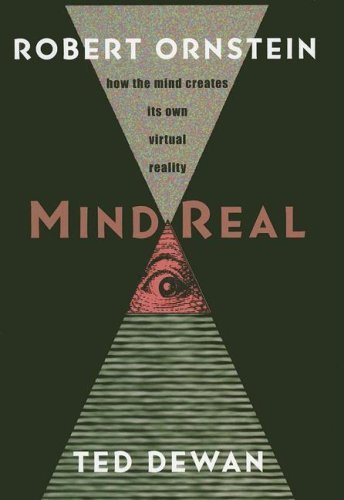 Central to MindReal is the argument that we don’t experience the world in its entirety, but as virtual reality. To avoid us becoming overwhelmed by the vast quantity of information “out there”, Mind LTD, in collusion with our senses, performs a filtering operation (or a kind of con trick, if you like) that results in just one trillionth of reality reaching our consciousness.  From this mere trickle of data, Mind LTD creates a set of illusions for the purpose of protecting us from too much reality and aiding our survival in the world by making things sufficiently simple and manageable for us. “It’s not a real world we experience, but a set of signals, which we ourselves have to learn how to shape into a moment-to-moment representation.” Moreover, our belief in the veracity of our mind-created “reality” is “stronger, more immediate and pervasive than any religious of cultural ideology…” and says Ornstein, this belief is just plain wrong and also the cause of much misunderstanding.

The idea that we filter out most available information is not new – Aldous Huxley wrote of the “reducing valve” of the senses several decades ago and indeed Ornstein himself gave a lucid account of the process in his bestselling Psychology of Consciousness first published in 1972 – but it is an idea, as Ornstein makes clear, whose implications humanity has yet to come to take account of.  Of course, it is one thing to describe a phenomenon in a psychology textbook or journal for academic purposes, but quite another, as Robert Ornstein does in MindReal, to suggest what might be done to correct the situation.

Part graphic novel (or more correctly graphic non-fiction) and part direct address, MindReal is the most accessible of Ornstein’s 20 or so books.  However, don’t be fooled by the lightness of the presentation, which includes an illustrated guided tour, courtesy of the “Supreme Being” (and thanks to illustrator, Ted Dewan) through the quirks and illusions that characterise the human mind – this is a serious and important book.  According to the dust jacket, it represents a “summa of Dr Ornstein’s research and writing of the past 35 years…as well as a seminal introduction to new readers”.

Ornstein points to four basic policies of the mind, policies that worked well for us in the past, but which are seriously out of date in the contemporary world and may even threaten our survival as a species if we do not recognise and do something about them:

And to compound the problem, the mind is neither stable nor reliable – it shifts and “wheels” to create its own version of reality, very often without our being aware of what is going on.  What the author calls this “…shifting, wheeling and dealing nature of the mind” is well illustrated by a social psychology experiment that was carried out at a shopping centre some decades ago.  The experimenters placed dollar bills in the entrance area and later interviewed the shoppers who had picked up the money, comparing their responses to those who had been less lucky. Those who had found the money had a much more positive and optimistic outlook: “They had better sex lives, had refrigerators they liked better and that had fewer repairs, and thought nuclear war was less likely.”  Whilst a skilled therapist can make use of this often unperceived openness to influence to help people make positive changes (often bringing influence to bear at an unconscious level through the use of embedded suggestions, metaphor and guided imagery), it is also true that it makes the human mind very vulnerable to the effects of whatever happens to be going on in the environment at any given time.

In sum, the human mind, which developed to aid our survival in the world as it was tens of thousands of years ago, is obsolete: “The problem we all have now is like having out-of-date software or keeping a tube-type radio going in the days of the Internet.”

So, what does the author suggest we can do?  Here are some of his ideas:

Three stages of self-observation are described: 1. Understanding that the mind wheels; 2. Identifying some of the wheels in retrospect; and 3. Becoming aware of what’s wheeling in and why, when it actually happens.  The last stage is challenging, “but like running a marathon, one needs to begin”. Note: Pat Williams’ article Our many minds and the opera of life (Human Givens Volume 15, No 2 2008), which draws on Ornstein’s earlier work, particularly Multimind, outlines some excellent practical approaches to the challenge.

In the same context, Ornstein also recommends that we make an effort to become aware of the huge effects of mood on the situations we find ourselves in, adding that it can be useful to “write down some of our thoughts when either elated or deflated, and see how we judge the same events (our finances, the attractiveness of our mate, our job accomplishments) so differently without any ‘real’ reason.

To counter its tendency to exploit the in-built vulnerabilities and biases of the human mind, Ornstein points to a need to, “…storm the media to create demands for information on long-term, large-scale events, such as global pollution and climate change, as well as population and technology trends that affect us all.”

A new curriculum concerning human nature is needed…”The more we understand how the mind lives and what capacities lie dormant, developed or overdeveloped in each of us, the quicker we can remake ourselves. ..We need to teach people not only to get information into their minds, but also to change the way we think.  One might call two major kinds of information-gathering ‘text’ and context’. Ever since the ancient Greeks, we’ve increasingly elaborated the ‘text’ approach to life, literally and figuratively – reducing experience to words and reducing those words to the literal value of information. But this ignores the surroundings and implications of our actions, the way events influence each other, the way we influence and interact with each other”.

It is worth adding that the Human Givens project is already engaged in these activities, at the level of individual development and on the wider educational front and indeed with regard to the media whenever the opportunity arises.

In MindReal Robert Ornstein not only describes key scientific and psychological findings, but illuminates their meaning and implications to inform his incisive and highly readable account of the real nature of the human mind.  In so doing he has provided with us a valuable blueprint for tackling the challenges we face. He ends his book with the following story, which encapsulates the “problem” of the human mind and perhaps suggests the direction we need to take towards its solution:

A father said to his double-seeing son:
“Son, you see two instead of one.”
“How can that be?” the boy replied. “If I were, there would seem to be four moons up there in place of two.”

Ian Thomson is the former deputy chair of the HGI‘s Registration and Professional Standards Committee. He works as a human givens practitioner in private practice and as an HGI accredited supervisor.

His past experience includes complaint management for a large organisation and delivering the Ethics component of the MA in Human Givens Psychotherapy which was run at Nottingham Trent University.