Home > About the Institute > Conferences and events

Our 2018 conference took place at the beautiful Woodland Grange in Leamington Spa, Warwickshire.

Its theme, suggested by our chairman Declan Lyons, couldn’t be more pertinent with the tumultuous state of affairs we see all around us and the ever-increasing numbers of people suffering from mental health problems.

Over millions of years brains evolved to reduce uncertainty. We learn in order to make us resilient and thus have a survival advantage. We study the past to try and read patterns of possibility in situations around us in the present. We observe, reflect and try to peer into the future in order to predict threats, or deduce how people might react to us, see round the next bend, so to speak.

In other words it is uncertainty that impelled us to develop and unfold our powers. That is the positive side of living with uncertainty.

From the point of view of mental health, accepting uncertainty and living well with it is essential but many are unable to do this, which is a contributing factor to anxiety disorders, depression and breakdowns.

In an ever more rapidly changing world, with 24–7 global news coverage, the unexpected event is always with us creating a miasma of low-level anxiety in the population ensuring a continued rise in mental illness. And modern media ramp it all up using fear to focus attention on the latest health scares, cyber-hacking, financial uncertainty, terrorism, and so on. Absurd levels of bureaucracy and media manipulation also constantly undermine our need for security and control interfering with our ability to discriminate between true and false, useful and harmful, honest and dishonest, safe and unsafe.

You are invited to join us in Royal Leamington Spa to consider these issues and draw inspiration from what promises to be another richly rewarding and enjoyable HGI event.

The speakers, who are drawn from a wide range of backgrounds, will explore the topic from multiple angles with a selection of broad-ranging talks and presentations. The final list is speakers has just been announced (view programme here), they include Joe Griffin and Ivan Tyrrell, co-founders of the HG approach, Sue Cook, the well-known journalist, writer, radio and TV broadcaster and David Goodhart. 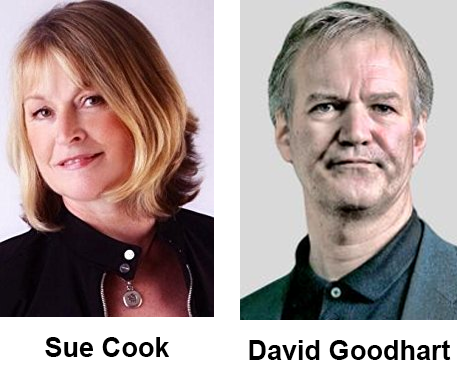 Sue is an Ambassador for the Prince’s Trust and a patron of the Rainbow Trust, the Children’s Liver Disease Foundation, and the British Wireless Fund for the Blind. She has an honours degree in psychology.

David is a prominent figure in public debate in the UK, founder and former editor of Prospect magazine and author of the best seller The Road to Somewhere, of which Jonathan Haidt said, “The best and most complete explanation I’ve seen for why things seem to be coming apart.”

Just some of the topics being covered over the weekend:

Why the ability to tolerate uncertainty made us human – The rise and fall of civilisations and human adaptability – Research into the efficacy of the HG approach – How to create ‘Safe-Uncertainty’ with let-down children – The paralysing effect of domestic emotional abuse – Overcoming the uncertainties faced by traumatised Armed Forces personnel on returning to Civvy Street – Political uncertainties: How the EU divided Britain into ‘The Anywheres’ and the ‘Somewheres’ – Why foreign travels broaden the mind – Entering motherhood and the labyrinth of uncertainty that follows – Neglected children reconnected with their families – How to encourage GPs to use HG tools – Whistle-blowing and Resilience – The freelancer’s life of uncertainty – And a new tool we could use to help counter the twin curses of nihilism and materialism that beset much of the world today.

Our bi-annual conferences are always inspiring and stimulating and a great networking opportunity. They are well attended by a range of interesting people from around the world, the majority of whom use the human givens approach directly in their work, but many others have benefited from it in their lives or are simply interested in how the rich psychological knowledge the approach encapsulates can be used to improve not only mental health and wellbeing, but any human endeavour.

The 2018 conference had now passed

(Attendance counts as 12 hours of CPD for HGI Members)

'Work as nutrition for self development'

Here's a sample of the quality of talks at our conferences – Joe Griffin filmed in 2012 at the HGI Conference, PLUS Q&A with Ivan Tyrrell