Denise Winn looks at the research on whether writing about traumatic experiences enhances physical and psychological health.

OVER 20 years ago, in the course of conversation, one American psychologist said to another, “I wonder if asking people to write about traumas could improve their health”. They decided to try to find out.

They found that they could only reserve laboratory rooms for one week, late on in the afternoon and, because of the time restrictions on the rooms, they could allot only 15 minutes for each participant for each writing task. So they duly decided to ask their participants to write on four consecutive days, in the late afternoon, for 15 minutes. And what they found was that people who wrote their deepest feelings about stressful or traumatic experiences had improved health over the next few months, compared with those who wrote about superficial topics.1

This finding captured the academic imagination worldwide. Most took it at face value and a flood of further studies followed, with the aim of replicating or refining the magic. Indeed, James Pennebaker (one of the original researchers and now co-guest editor of a special issue of the British Journal of Health Psychology devoted to expressive writing) wryly notes that over 200 studies have, to date, been carried out with “nearly enough meta-analyses on expressive writing studies to conduct a meta-meta-analysis”.2 And what would that meta-meta-analysis find? Sometimes expressive writing ‘works’; sometimes it doesn’t.

Although the original researchers readily confess that the procedure they adopted owed more to circumstance than design, having participants write about deep trauma-related feelings for 15 to 20 minutes a day for three or four days became the implicit norm in the follow-up studies – much as, perhaps, the mix of features found to ‘work’ that duly became EMDR (or cognitive-behavioural therapy or interpersonal therapy) soon became set in stone, with the exact order and content presumed to be the key to success. (Another reason, of course, is that following an exact protocol makes research, especially randomised controlled trials, much easier to carry out.) But James Pennebaker and his fellow guest editor Joshua Smyth are much more openminded: they say that psychologists should now question the implicit assumptions of the original writing paradigm so readily adopted in the early, heady days of success because “many … are simply wrong”.

For instance, it has been shown (probably to no surprise of those working from the human givens approach) that, to gain the positive outcome claimed for physical, and often psychological health, there is no actual need to write about traumatic and/or negative experiences. Writing about positive experiences has had comparable effects, as has writing about other people’s traumas, rather than one’s own.2

It is also by no means crucial that, to benefit from expressive writing, it must be done for at least 15 minutes on quite a few consecutive days. In one study, undergraduates were asked to spend just two minutes at a computer, writing about something traumatic (most chose illness, injury or death of a friend or family member), something positive or something neutral. Those who wrote about trauma or something positive both rated their physical health more highly than controls, up to six weeks later. (This and all the following studies cited appeared in the special issue, unless otherwise indicated.3) Other researchers found that, when college students wrote their deepest thoughts and feelings about a life transition three times in an hour, with 10-minute breaks, or else three times in three days, with 24-hour breaks, there were comparable physical health benefits. However, writing three times in three hours, with 35-minute breaks, was not to be recommended: although health benefits were comparable, individuals rated the activity as less helpful and less valuable than the others rated theirs. (The researchers duly recommend repeating the study with larger samples and other modifications but, from my non-academic stance, looking at odd results like those, I’d say stop wasting public money on it.)

Next comes the question, “Is expressive writing only effective on certain people?”2 (After all, the most recent and comprehensive meta-analysis shows the overall effect size of expressive writing is really quite modest.4) Plenty of researchers have done studies that have led them to the conclusion that, in some cases, it is effective and sometimes not – although, unfortunately, some of them contradict each other. So we have those who have found that expressive writing works best for those who have trouble expressing their feelings: for instance people who bottle up hostility; gay men who are constrained from expressing themselves openly (writing about their thoughts and feelings about being gay reduced tendency to ruminate negatively); and people who have difficulty identifying their emotions or who tend to separate off positive and negative feelings about themselves – both commonly a response to trauma. However, in the case of sufferers from migraine, it was of more help to those who were able to express their emotions. Results were not at all good with undergraduates who were highly distressed (a single session of expressive writing about deep feelings made them feel worse, so the researchers suggest that they might need multiple sessions!). But for people distressed by fibromyalgia, it could be an asset in those who had little social support and were better educated. It did not help people with rheumatoid arthritis (average age 58). No improvement was found among people bereaved of a spouse, or those suffering disordered eating or suicidal tendencies.5 Primary carers of physically frail or mentally impaired older adults found more help from writing about time management than about negative feelings.

What rather jumps out at me from all this, especially having had the benefit of reading all the papers, is just how much of the research has been carried out on bright, young, ever available university students – and how much this might skew the findings (a common problem in psychology research generally, of course). As one or more of the researchers admit, there are some great results for improving psychological and physical wellbeing in healthy populations [students] but, in ill populations, “the salutary effects are smaller and less consistent”. Some attribute the modest effect of emotional writing in medical populations to patients having, in general, less emotional awareness and fewer processing skills than university students. Students are more used to ‘emotional writing’ about their problems, and physical and psychological health outcome measures may look good because most are pretty healthy anyway.

When it comes to trying to explain all these varied findings, the guest editors admit that science prefers the law of parsimony but claim that “a cascade of dimensions to writing … must be appreciated”, with explanations at the cellular, physiological, emotional, cognitive, behavioural and interpersonal levels of analysis, among others, deemed worthy of consideration.2 Or could it be that researchers may have paid more attention to the container than the content? (Is it the length of sessions that counts? Is it the spacing between them? Is it the setting? Unsurprisingly some researchers found better effects when people wrote at home rather than in a laboratory – the latter being a condition that researchers also seem to have followed slavishly at the outset.) It seems pretty clear, across the studies, positive, negative or just inconclusive, that generating positive thinking and a wider perspective through writing tasks led to the better outcomes (and this has also been found in studies not included in this special issue6). When 607 people were asked to write about their feelings after the Madrid terrorist attack, those who used more positive words and positive reframing experienced a decrease in negative emotions (although not an increase in positivevones). Carers of older mentally or physically infirm relatives (the subject of a study referred to earlier) did experience benefit, in a follow-up study, if their writing expressed optimism. Sufferers from PTSD, who were asked to write their story and, through doing so, examine the validity of their negative beliefs and then re-tell their story incorporating any insights, did not experience a reduction in symptoms (no surprises there) but did experience less anger, tension and depression.

Finally, a study that asked participants to keep a diary for a week, first recording events in the first person (self disclosing as ‘I’), then re-telling in the second person (in effect, creating an inner dialogue with a supportive other – ‘you’) and then yet again, in the third person (where writing about ‘he’, ‘she’, etc introduces a objective and rational tone) resulted, through the gradual change in perspective, in healthier emotional distancing.

The guest editors offer a vivid metaphor for what they have set out to do: imagine stumbling into the kitchen in a new pair of shoes, pulling out a host of ingredients and spices from your fridge and cupboard, throwing them together haphazardly, cooking at low temperature for 15 minutes – and coming up with the perfect sauce! What elements do you recreate if you want to make it again? Do you take the low temperature for granted but assume the new shoes played no part? But, possibly, there could have been a quirk in one of the ingredients – and a crucial chemical reaction with the smell of the leather. “Only dozens of cooking experiments, each of which varies an ingredient, a procedure, or even shoes, can tell,” the editors assert.2 But, in the case of expressive writing, there isn’t as yet a clear answer, so they hope the ‘sauce’ will be further scrutinised “by many an investigative chef in the future”.

My take on it, completely aside from any discussion of ideal trauma treatment, is this. We know from many sources (if not sauces) that positive reframing and gaining greater perspective are key in overcoming depression, anxiety and other mental ills. Maybe, instead of trying to create an exact replica of a sauce that we weren’t paying proper attention to in the first place, we should take the ingredients that reliably deliver the outcome we want (much as adding arrowroot makes for a thicker sauce and crème fraîche is a healthier way to make it creamier) and use them in any number of different recipes.

Denise Winn is editor of the Human Givens Journal, a practising human givens therapist and tutor for HG College. 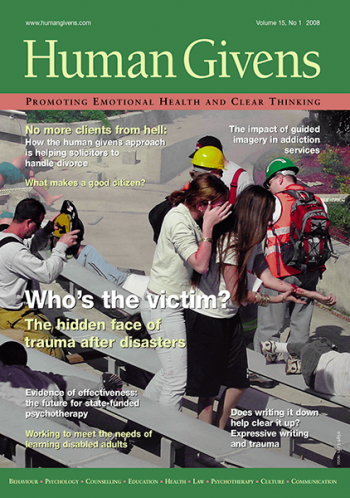