The torment of ‘caring’ for a much-loved brother suffering from psychosis, to whom the NHS has failed to offer meaningful help …

IMAGINE watching as a loved one is tortured in front of your eyes. Now think of him watching you watching his agony, while you say and do nothing. That’s what it’s often like, as, week after week, I sit, with a pounding head and a heavy heart, spending time with my brother, being ‘supportive’.

If he experiences a problem with, say, a broken bookshelf or a lost wallet, I am there to take instant action. But when he says someone is entering his flat in his absence, poisoning his food and tampering with the water supply, causing him to suffer severe gastrointestinal symptoms and allergic skin reactions, I do nothing. I don’t spring to my feet and say, “Leave this to me! I’ll find the bastards who’ve treated you like that and caused you all this pain! I’m calling the police. I won’t let you be abused or victimised in this way!” I just sit, listen and look sympathetic. I remain silent because I don’t know what to say so as not to inflame the situation, or be accused of siding with ‘them’. Yet by staying silent, I risk colluding with his view of a world which persecutes him.

My brother does not acknowledge the diagnosis of paranoid schizophrenia and refuses any medication or intervention. Last time he was hospitalised against his will, he took his case to a mental health tribunal, claiming that the medication he was forced to take was a danger to his health, and won his case for discharge, without the aid of a solicitor. Despite our pleas for continued contact with the hospital and some kind of ‘talking therapy’, this was not within the tribunal’s remit to grant. With no requirement for medication, he refused all contact with the mental health services, including his social worker, who he claimed had done nothing to help him and was ‘on their side’. Stripped of the ability to prescribe medication or else to refer on, the GP too was helpless.

So once again it was down to me to provide the support and companionship he required. I helped him find somewhere to live and I see him every week for a meal, companionship and support.

My brother is intelligent, caring, perceptive, and articulate. He is also extremely rational, but applies his reasoning from a flawed perspective. From this perspective, on top of all the other injustices he has been subjected to, he has suffered physical and mental abuse and torment from the medical and psychiatric professions and does not trust them at all. He feels stigmatised. He feels that he has lost 20 years of his life and a successful, well-paid career he trained long and hard for. He has no money, no pension, no future. He is stuck in an empty hell.

I have little doubt that some of my brother’s beliefs are based in reality. Many of the events he tells me about did happen all those years ago, though possibly not exactly as he now remembers them. But who am I, who was not there at the time, to judge which, and to what extent? It’s when I hear of all the ‘coincidences’ recounted with heavy irony that I start to feel trapped myself. Is there no way we can break out of this? Why can’t the NHS help me, his carer, to care for him properly since it is no longer doing the job itself?

I phone my brother mid-week to arrange which day I’ll visit at the weekend and to provide an opportunity for interim ‘support’. But I dread making the phone calls. For one thing, it’s hard to start the conversation. “How are you?” or “How’s your week been?” or anything else like that will only elicit a response of “How do you think?” or “I’ve told you before, until these people have been caught and stand trial [the ‘people’ who interfered with his work, led him to lose his job and still constantly have him followed] nothing is ever going to change! I don’t know how much more I can take.”

Sometimes he’ll shout out, “I’m starving, of course! I can’t eat any of the food in the house – I know they’ve been in. They’ve left their fingerprints.” Or “Even the apples have been injected. I’ve been in so much pain from the poison, I didn’t sleep a wink last night”. Or “I’m trapped here all day. If I go out, they’ll come in. I can’t stand any more. They are taking away my life. Someone has to help me identify them and bring them to justice!” The criticism of me is unspoken but, I fear, deeply felt.

By the time I put the phone down, my head is reeling. Sometimes I can just block it out and get on with what I was going to do next. At other times, everything I was intending to do seems superficial after our conversation and it takes time to be able to let go of the distress.

When I visit him, I don’t like to talk about my busy life too much as it highlights the contrast with his. Usually he just launches into all the anguish and anger that fills his own, and I can do nothing to get the conversation back onto a more pleasant footing. After an outburst, switching to more ‘ordinary’ conversation feels as though I’m diminishing what he’s been saying. And he doesn’t want to be told how awful he must feel, or any other ‘psychobabble’. It takes energy to deal with a barrage of anger and pain, and there are times when I don’t have any.

But there are also good times, when we go out or sit and chat. My brother brings me up to date on the news and current events, or we share family memories and laugh. On other occasions, the whole family – now four generations – gets together and no one outside the family would guess that there is anything wrong. My brother joins in the conversation, plays with the youngsters and appears as relaxed as any of us. At these times, when I am enjoying his company, I find myself thinking, “He can’t be ill – he seems so well. Surely there must be a simple solution to all this pain?”

The NHS is saving a lot of money through not treating or supporting my brother, but what support am I, the main carer, getting instead? When I sit with my brother and listen to tales of perceived, or possibly real, injustice, what should I say? How should I respond? I’m not meant to contradict or invalidate his beliefs. Yet neither should I collude with him.

I belong to a carers’ group and attend the monthly meetings when I can. They are supportive, but I don’t just want support. I want information, ideas, direction. I have long asked for training so as to be able to handle the various moods, outbursts or episodes of distress more usefully, so that, at least, if I see an opportunity for intervention, I can do so positively instead of saying nothing. Recently I received a letter from my local branch of Rethink [formerly the Schizophrenia Fellowship], inviting me to three training days. They don’t actually offer what I need, but maybe they will help a bit. Naturally, I have to take time off work to attend, so I will have three days less annual leave as a result, even though I probably need it more than most people.

My brother is a caring person. If anyone in my family is unwell or has a problem, my brother immediately expresses concern and makes helpful and constructive suggestions. I often feel ashamed that he offers me more help than I appear to offer him.

Then there’s the impact on my life. I effectively work a six-day week, caring both for my father, disabled by severe emphysema, and my brother at weekends. In the past, I have had to deal with my brother’s hospitalisation by taking a morning off work ‘as holiday’, then having to go into the office after lunch as though nothing has happened, when really I am screaming inside. I might have a phone call during office hours that makes concentration hard, or have to back out of an event with my children, grandchildren or friends to deal with a problem to do with my brother. I might come home from a visit to my brother late on a Sunday evening with a migraine that lasts well into Monday. My boss knows that I’m a carer for my elderly father, but I don’t talk about supporting my brother through his problems. While there may be attempts to end the stigma against sufferers, how can I be sure that being a carer for two relatives won’t stand in the way of a promotion that, financially, I badly need?

On the whole, I’m a cheerful person and laugh a lot with friends and colleagues. I even forget about the problems for periods at a time. But it’s still lurking there at the back of my mind, seven days a week, the sadness of knowing that my brother’s life is so full of pain, anxiety, anguish and fear. I also feel guilt, however ridiculous, that I can live my life normally while my brother is in a constant mental hell.

I admire my brother hugely for his courage in dealing with all the difficulties and fear and loneliness in his life; for his determination to vindicate himself and bring about the positive changes he is sure he deserves – he spends his days in the library, searching for information about the organisation he worked for, if he dares go out, or else listening to the radio or watching the television, in the hope of hitting on ‘clues’ to help bring the perpetrators of his pain to justice, so that he can get on with his life; for the compassion and caring he shows to us, his family, even though we appear to be insensitive to his own, more desperate needs; for his ability to laugh and love despite the enormous burden of sadness and anger he carries around with him all the time. In any other circumstances, my brother would get recognition for his truly human qualities.

Maybe one of the saddest parts of it all is that I can’t tell him any of this. Because, from his point of view, he is struggling to survive and I’m doing nothing to help him.

The author, who has chosen to remain anonymous, has now been put in touch with Hartlepool Mind for advice and guidance on how to help. 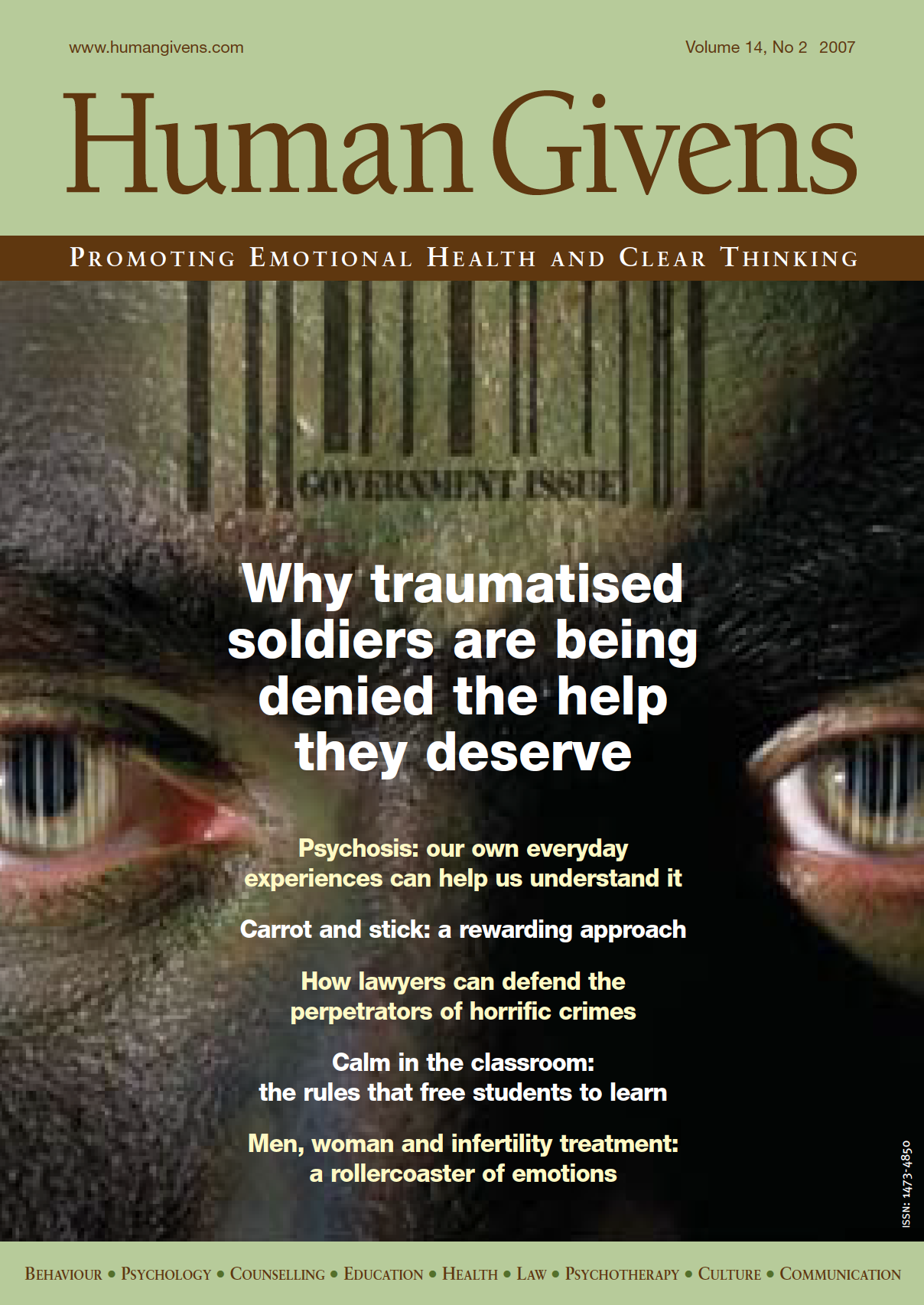