A Christmas Carol... or a tale of three therapists?

One Christmas Eve, a dire apparition clanking with chains warns a mean, fearful old man, who is at odds with the world, that he will be given a chance to change his ways: one by one, three strange spectres reveal episodes from his past, present and future. Afterwards, he is a changed person.1

Commentators pondering Ebenezer Scrooge’s experience in Dickens’s A Christmas Carol generally ascribe it to a nightmare.2 Some suggest that Dickens was accurately depicting psychiatric disorder in Scrooge: a brief psychotic episode3 or Lewy body dementia.4 Such a notion not only negates the purpose of the tale but implies someone being cured by the very symptoms of their supposed illness. I suggest, instead, that the literary device of the three spirits is a metaphor for something akin to human givens therapy,5 involving identification of unmet emotional needs and vestiges of what has become the rewind technique; with its use of relaxation, autoscopy (seeing oneself), mental time travel, replay of autobiographical memories and rehearsal of desired behaviours. And not only is it Scrooge who appears redeemed, but Dickens himself, whose life has many parallels with that of his fictional character.

Scrooge’s unmet emotional needs are clear. He is miserly and unfeeling, living a solitary life in which he avoids giving attention to others and is rarely offered any – no one greets him on the street. We later learn that he feels unsafe – he “fears the world”. It is the ghost of Marley, his equally miserly business partner, now dead for exactly seven years, who perhaps personifies Scrooge’s unconscious cry for help or the ‘stuck’ feeling that leads people into therapy. Marley, with his chains of heavy steel clasped painfully around his middle, has been instructed to make himself visible to Scrooge and to prepare him for reclamation.

The Ghost of Christmas Past is an intriguing creation, simultaneously old man and child, changing shape from moment to moment. It is as if Dickens is planting the idea that the past (or perception of the past) does not have to direct the present – a crucial tenet of human givens therapy.

When people are asked to recall personal memories, the older the memory the more likely they are to recall it from an observer perspective with themselves in the image, rather than from a ‘field’ perspective as they originally saw it.6 An observer perspective is used in the rewind technique to distance an individual from traumatic emotions associated with an event.7 When Scrooge revisits four Christmases with the Ghost, he watches himself (thus, these are not dreams or hallucinations, nor are they traumatic flash-backs). Unlike in the rewind technique, however, Scrooge does experience emotions as he observes the events, so does not have a fully decentred perspective. However, the emotions Scrooge experiences are empathic – sharing the joy and sadness of his old self rather than reliving it (as in the original visual-kinaesthetic disassociation technique8). Thus he is sad when brought back to his old, hated boarding school, where he sees himself left alone at Christmas, but takes joy in the revived memory of favourite, sustaining, storybook characters – in effect, accessing the innate resource of imagination that he had long shut off. Almost from the start of therapy he desires to make amends when he recalls abusing a carol singer. He knows both sadness and happiness when, on another Christmas, his sister Fanny comes to bring him home “for good” because Scrooge’s father has become “kinder”.

When the Ghost takes Scrooge to the warehouse where he was once apprenticed, and the owner Fezziwig is hosting a joyous Christmas Eve ball for his employees, Scrooge gets into the spirit of the occasion. In effect, he is rehearsing having fun and relating to others. He rediscovers, when the ghost pretends to ridicule the gratitude of the workers to their boss for so little, the understanding that respect and caring are more important than display of wealth. “ ‘It isn’t that,’ said Scrooge, heated by the remark, and speaking unconsciously like his former, not his latter, self. ‘It isn’t that, Spirit. He has the power to render us happy or unhappy; to make our service light or burdensome; a pleasure or a toil. … The happiness he gives is quite as great as if it cost a fortune.’ ”

The next Christmas throws light on how Scrooge became a miser. His girlfriend Belle is distraught because Scrooge’s “fear of the world” has led him to trust and care for nothing but the making of money, and so she leaves him. Scrooge is then taken to one more Christmas – intriguingly, one he never attended. It is the night of Marley’s death: he sees Belle as a mother, and her loving husband coming home to give the happy, excited children their Christmas gifts and telling Belle that he passed Scrooge’s office window and saw him there, “quite alone in the world”. Scrooge can bear no more and, when he turns upon the Ghost to beg him to remove him from that place, he sees it looking on him “with a face in which in some strange way there were fragments of all the faces it had shown him”.

In his construction of the tale, Dickens may have drawn on an awareness of ‘panoramic memory’ – the phenomenon whereby people in near-death situations report seeing series of episodic memories (both good and bad) flash through their mind at speed, accompanied by the original emotions. Some describe its occurrence in reverse order, some in chronological order, and some report visual images not based on autobiographical memories but on possible events associated with their own death, such as relatives’ reactions or their funeral.9 In 1825, Rear Admiral Sir Francis Beaufort described in a letter such an experience that occurred when he nearly drowned at the age of 13.10 It is quite possible that Dickens knew of this account or saw the letter. His father worked in the Naval Pay Office for 20 years, dealing directly with seamen,11 including three years in London whilst Beaufort was at the Admiralty, and the letter was known of in elite social circles.12 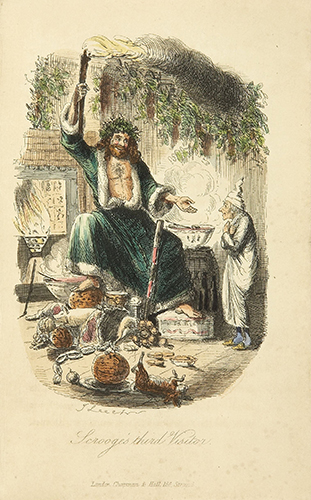 The Ghost of Christmas Present takes Scrooge far and wide to witness how, even in constrained circumstances, people rejoice at Christmas. Scrooge sees his clerk Bob Cratchit’s family, including the disabled child Tiny Tim, being merry despite their poverty and, once again, he gets the chance to rehearse how it feels to be merry, when he is secretly present at his nephew’s festive gathering, joining in their games with relish. Then, the wordless Ghost of Christmas Yet To Come takes over and Scrooge is shown a deathbed, a dead man’s possessions being sold off by thieves, an empty chair at the Cratchits’ table – and a gravestone with his name inscribed on it. Only then does he realise that both he and Tiny Tim are dead. He asks if what he has seen are the shadows of what will be – or what may be. It is as if he has been guided to consider the worst that can happen if he carries on in his old way, a therapeutic technique often used to help people arrive at the decision to stop addictive behaviours.

When, afterwards, Scrooge professes, “I will live in the Past, the Present, and the Future!”, surely it means that he has recast his understanding of his past and will henceforth make full use of his innate resources as a human being. After just two sessions of guided imagery, the therapy is complete and successful! He becomes joyful, bountiful and much loved – and neither he nor Tiny Tim dies.

Might A Christmas Carol also have been therapeutic for Dickens? He had an extraordinarily expansive and detailed auto-biographical memory, which included the names, facial features and mannerisms of individuals met years before, the appearance of rooms and buildings, and sequences of events. These all surfaced in his novels, including A Christmas Carol. For instance, Scrooge’s school was a combination of Dickens’s home and an old blacking factory and the Cratchit home is based on the London house that Dickens lived in as a boy, when his family finally settled there from Chatham. The Cratchit children are his own siblings and Tiny Tim is his own sickly brother, Tiny Fred. The book characters, such as Ali Baba, are even Dickens’s own favourites.11

In London, the Dickens family fell upon dire poverty. The father ended up in the debtors’ jail, where the family was obliged to accompany him – except Charles, who, removed from school at the age of 10, was living in an attic and working in a factory where he put bootblack into jars. He was terribly unhappy and ashamed of his early life experiences and never told his own children about them. Dickens also suffered heartbreak, losing his first love because her banker father didn’t think he would ever amount to much. Also like Scrooge, Dickens knew what it was like to be preoccupied with money: he never had enough. His father sponged off him his entire life, and Dickens had four children and was worried about the fifth on the way when he wrote A Christmas Carol.11 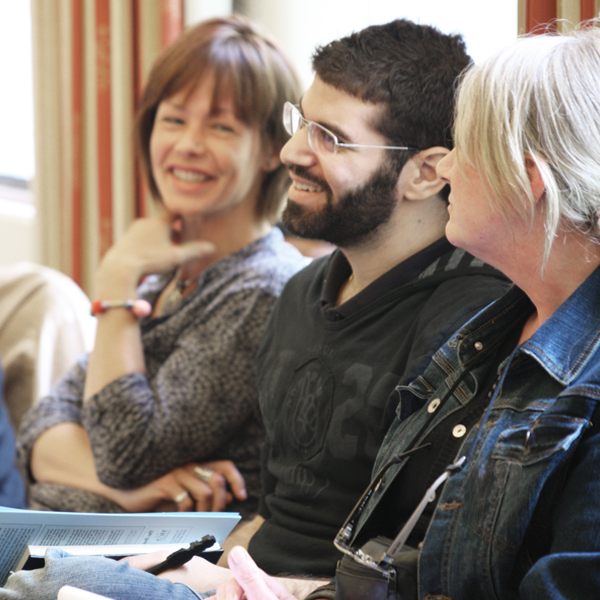 Unlike Scrooge, Dickens was a sociable man but, in his Christmas celebrations after publication of A Christmas Carol, he threw himself into the partying with vigour. Had he, in effect, detraumatised some of his early experience through his own tale? Dickens was known to have studied mesmerism, the forerunner of hypnosis, and was interested in its curative potential. He later used it to ‘calm down’ his illustrator John Leech, who was agitated after a brain injury, and he induced trance in a friend, Augusta de la Rue, to help her control anxiety and a facial tic – using “a primitive form of hypnotic psychotherapy”.13 He was, therefore, interested in individuals’ own mental capacity to bring about change and may have been aware of phenomena such as time distortion, which he exploited brilliantly in the story.

Whatever its provenance, A Christmas Carol was the most extraordinary creation. Dickens wrote it in six weeks, during October and November of 1843 to highlight the plight of poor children. It sold 6000 copies between 17 December and Christmas Eve and 2000 from a second print by 6 January and was the most successful book that Christmas. In creating an enduring fairy tale, he also created Christmas as we know it, with its emphasis on family, goodwill and benevolence.11 Something about the story struck a universal chord. Could it have been Dickens’s intuition that certain emotional needs must be met for individual and societal mental health, and that helping people identify and meet them is the most realistic and meaningful of therapeutic goals?

James Tapper is consultant clinical neuropsychologist at St Helens & Knowsley Hospitals NHS Trust. He is chair of the Association of Human Givens Practitioners in the NHS. 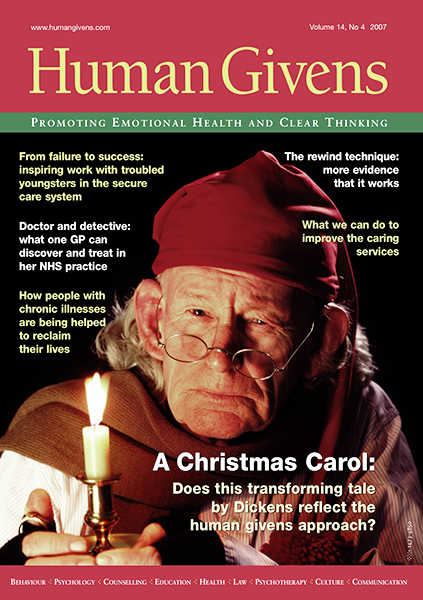 Spread the word – each issue of the Journal is jam-packed with thought-provoking articles, interviews, case histories, news, research findings, book reviews and more. The journal takes no advertising at all, in order to maintain its editorial independence..

To survive it needs new readers and subscribers – if you've enjoyed reading the articles, case histories and interviews on this website, and would like to support the human givens approach – please take out a subscription or buy a back issue today.