My experience with antidepressants

James shares his difficult experience of coming off anti-depressant medication – and reflects on the effects they have had on his life.

“My name is James and I live in the UK with my wife and daughter. I have been taking an antidepressant for six years and, for the last 12 months, I have been attempting to slowly withdraw. It is the single most gruelling, most challenging experience of my life and one I was in no way prepared for by my prescriber.

"In 2011, I was working in the UK Civil Service, I had just become a father and I was sociable and outgoing. Towards the end of that year, pressures began to build, I was struggling with stress at work and with the pressures of being a new father. I went to my GP and was referred to a psychiatrist who diagnosed anxiety and depression and prescribed mirtazapine.

"After a couple of years of treatment, I decided that the antidepressant was not helping me and I wanted to stop. The advice of my GP was “just take half a tablet for a week then stop” and that’s what I did. I found the experience of trying to stop my anti-depressant deeply unpleasant. I made repeated attempts to reduce, only to experience insomnia, headaches, nausea, increase in number and severity of panic attacks, restlessness and agitation. 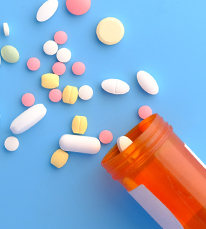 "My doctor told me that what I was experiencing was a return of my original symptoms, but I didn't agree because many of the withdrawal symptoms, such as headaches and agitation, had never been a feature of my anxiety or depression. Eventually, I managed to reduce to the lowest possible dose available in pill form but I wasn’t able to reduce further. During this time, I made several attempts to get back to work but none were successful and I eventually accepted voluntary redundancy on ill health grounds in late 2013.

"Recently, I have been able to secure my local doctor's agreement to commence tapering with a liquid version of my medication. Tapering with a liquid is not painless, each reduction is extremely challenging. Four days after each dosage reduction, I experience nausea, dizziness, fatigue, tinnitus and headaches. This gradually eases but it is also highly variable in nature, some days I can function, other days I am forced to rest. During the last twelve months of withdrawal, I have had unrelenting insomnia which leaves me fatigued, confused and often feeling hopeless and suicidal. This experience has had a huge impact on my family, my wife feels like she has lost her husband and my daughter wonders what has happened to her father.

"My prescriber at no time gave any indication that this antidepressant would be difficult to stop or that I may experience withdrawal symptoms even when taking care to slowly and carefully reduce. Even worse, most doctors I have consulted over the last few years have denied that protracted withdrawal symptoms are possible and have sought to downplay my experiences. I feel that my health and wellbeing has been significantly and detrimentally affected by antidepressant withdrawal.”

Human Givens practitioner Marion Brown  ‘met’ James in late 2016 through a Facebook self-help group which was set up by and for people struggling to recover from the effects of antidepressants.  She continues the story:

“James was interviewed on Radio 5-live Investigates “Antidepressants on the increase” in early 2017 and following that he decided to put his own IT and recording skills to good use and began making his own series of freely available podcasts called ‘Let’s Talk Withdrawal’, where people could share expertise, tips and experiences, together with a Facebook group of the same name.

"I had the honour of being one of James’ early podcast guests.  This series of his own podcasts led on to James being asked by Bob Whitaker to launch the MadInAmerica podcasts.

"When you listen to James’s excellent quality podcasts, it can be hard to believe the struggle that he is enduring:  he can barely leave his home and suffers terribly with insomnia and the inevitable effects of that. Debilitating and unrelenting insomnia is a very common ongoing effect, together with horrible digestive and other physical problems, caused by antidepressant  medicines.

"James’s wife has to somehow roll with the tremendous ups and downs (the ‘waves and windows’) of all this as best she can – and this can be a very scary ongoing journey.

"In Human Givens terms, working with people who are struggling in this way involves truly understanding that their human ‘resources’ have been seriously damaged by the effects of the medication. The entire nervous system ‘balancing’ and normal homeostasis has been tampered with and rendered (hopefully temporarily) chaotic and defective, so that it is no simple matter to support recovery.

"Being accepted and supported within the online community helps to meet emotional needs for connection, validation and acceptance and can happen online and 24/7, even when people are bed-bound or house-bound. There is respect for each other and the movement and campaign to ‘get the message out’ gives all involved a true sense of meaning and purpose.

"People are discovering that they can find and share important online research and can write, speak and use social media effectively – as well as re-purposing whatever skills and experience they may bring from their own earlier lives and (often ruined) careers, as and when they feel well enough and able to.

"Recovery can and does happen over time (which varies widely for different people) and involves gradual re-balancing, de-toxifying and healing of all physiological systems as slowly and safely as possible.  From what we are learning, there are huge numbers of people finding themselves caught in this trap, and there are no easy solutions.

"I have learned an enormous amount from James’s podcasts – and from the self-help member discussions that take place on his Let’s Talk Withdrawal Podcast Facebook page.  There are so many awful unfolding case studies that all too frequently follow the ‘red’ pattern of events illustrated in our InfoGraphic – which James and his wife kindly created from the initial very Heath-Robinson diagram I had made earlier.

"As James himself says, if only, back in 2011, he had never started on the medication roundabout and had instead visited a Human Givens therapist, the intervening years would likely have been very different for him and his family. I hope one day to meet up with him in person!”

Use these links to read Marion’s more in-depth explanations of the side effects of medication and help with withdrawal, using the human givens approach to health and wellbeing as a framework.

There are many problems inherent in the liberal prescribing of psychiatric prescription drugs but they can be summarised as:

Posted 15.6.18
Join expert Beverley Thomson for this special event held via Zoom: Antidepressants: what we all need to know - find out more >