Humanity under stress: a survival strategy

The governing organisations of the world seem all at sea. They are missing an essential element: that of the psychology of human nature, which is programmed into us from our genes (the human 'givens').

To ordinary thoughtful people, the governing organisations of the world seem all at sea.

It is clear that, in all the different ways in which they try to deal with the complex problems of the world, however well-intentioned they are, they are missing an essential element: that of the psychology of human nature, which is programmed into us from our genes (the human 'givens').

A story best illustrates what is happening:

After yet another disastrous project that resulted in higher taxes and more hardship imposed on the people, Nasrudin let it be known at court that he was a master chef. One day he announced a feast at which he would prepare the most delicious new food. The King and all of his advisers were invited.

When the various dignitaries arrived, full of anticipation, the food was presented in great style. But it proved to be disgusting.

“What is this abominable, poisonous mess you are asking us to eat?” cried the outraged guests. “You’re making us all sick!”

“This is my latest recipe. I made it up as I went along, putting in at random anything that came to hand — if it seemed like a good idea.”

“That’s absurd!” the King and all his advisors shouted at once.“That’s no way to prepare a meal.”

“I agree,” said Nasrudin, before making a hasty exit, “But I thought it would be interesting, nonetheless, to try out a recipe based on your way of doing things.”

The Human Givens Charter, and the pages that follow it, are intended to unpack what this means and provide an opportunity for us all to step back and look at the bigger picture.

It complements the work published as Human Givens: The new approach to emotional health and clear thinking. 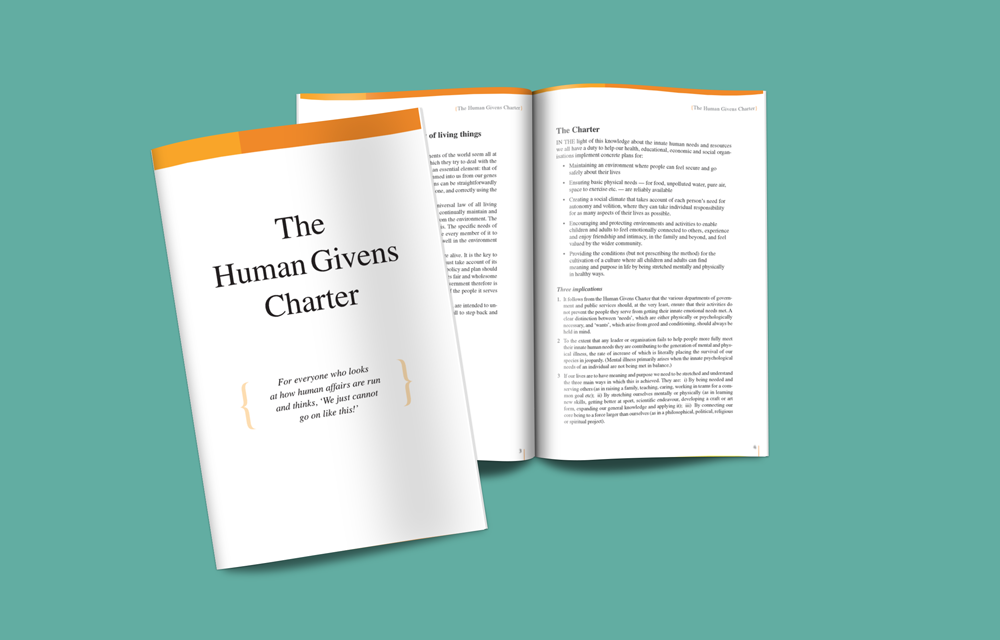